I want to send a special thanks to Laura Sebright at Tigger Publishing for sending me Mind Over Mountain-A Mental and Physical Climb to the Top by Robby Kojetin to review. 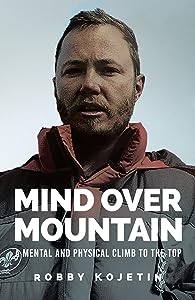 Robby Kojetin lives in Johannesburg, South Africa, and is a high-altitude adventure. Since his accident in 2006 which resulted in him breaking both of his ankles, he has gone on to become one of only a handful of people to have stood on top of the world’s highest mountain, Mount Everest. He has also climbed Kilimanjaro nine times, completed the Ironman triathlon, and scaled five of the Seven Summits. Known as an inspirational and engaging speaker on stage, he presents on the topics of failure, self-doubt and persisting against all odds, in the hopes of inspiring people of all ages and backgrounds facing the daunting mountains and obstacles in their own lives.

Robby is a proud husband and father who also coaches people to reach their personal summit goals. He is a regular contributor to a number of radio programmes, magazine articles and TV features, including DiscoveryChannel’s Everest: Beyond the Limit.

A simple mistake at an indoor climbing gym sentenced 28-year-old Robby to a year in a wheelchair, shattering his aspirations of becoming a mountaineer. In the months that followed, Robby faced depression, anxiety, suicidal thoughts and a complete loss of his sense of identity.

But from somewhere deep inside him, he summoned up the strength to keep going even when all seemed lost; he embarked on a monumental journey, a feat of mental and physical strength. His weakness became his power. This story is more than a biography or an account of a mountaineering expedition – it showcases the human spirit and shows us all how it is possible to rewrite the definition of what is possible. From those dark days, Robby has become the embodiment of perseverance and possibility, overcoming the odds to join the handful of people who have summited Mount Everest.

One reviewer said “I laughed, I cried, got angry at why something so terrible could happen to someone so good, but most of all I was in awe of what Robby overcame!! A must-read for anyone!!”

At 22 years old Robby’s identity and self-confidence were tied to rock climbing and all the adventure it brought. He was paving away in a career that he enjoyed that gave him the time off needed to continue his climbing adventures.

Until one fateful day, while practicing on a climbing wall, he jumped off as he had done many times before, the floor gave way causing Robby to shatter both ankles, fracturing several bones and rupturing the tendons from the shin down.

This is a devastating blow to anyone but for an avid rock climber, this could be the end of the adventure. With the love and support of family and friends, Robby concentrates on recovery and walking again. The recovery period is slow, very painful, and takes a toll on his mental health. Some days are dark with no light at the end of the tunnel but he pushes forward.

What Robby does from here is miraculous, not only does Robby walk again but goes on to climb the highest mountain in the world Mount Everest.

This book is a fast and very enthralling read. It’s a story of grit and what the mind can allow us to accomplish. I would recommend this book to anyone.

TriggerHub.org is the first mental health organization of its kind. We are bringing mental health recovery and balance to millions of people worldwide through the power of our books.

We have built a first-class resource of curated books produced and published in-house to create a unique collection of mental health recovery titles unrivaled in quality and selection. We work with experts, psychologists, doctors, and coaches to produce our books, but we also work with real people looking to share their stories to reach out to others and provide hope, understanding, and compassion. These brave authors also aim to raise awareness of mental health’s “human” face and its impact on everyday lives.