“I just want people to know that they don’t have to be afraid of their truth. Your truth is important, your truth is needed.”

Danyol Jaye was sexually abused and raped repeatedly by his older cousin between the ages of 7 and 10. The cousin enabled multiple perpetrator sexual assault when he locked Danyol in a dark closet and had his friends take turns entering the closet to sexually assault him.

Danyol first disclosed the abuse at age 15 to a close neighbor who was a friend of his mother’s. Not ready to share his story with his family, Danyol trusted the neighbor with the information. However, she immediately told his mother, who confronted him.

“It just felt like another violation. I felt in that moment that not only did my cousin violate me and take something from me, but now a person I trusted with this information also violated me and stole another choice from me. That feeling of violation was as hard as it was to endure the actual trauma.” 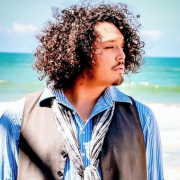 Danyol underwent a retraumatization from the violation of losing control of his story, and from his family’s reaction to it. Many of his family members questioned why he waited to speak about the abuse, and openly expressed their disbelief in his story. “There was so much conversation about me without me, but no one ever had a conversation with me.”

Because of the abuse, Danyol has suffered from body image issues, depression, and trust issues. Certain triggers related to the abuse—such as dark rooms—also cause him anxiety.

5 words that describe me:

On listening to survivors:

“There was so much conversation about me without me, but no one ever had a conversation with me about how I was doing, about what happened to me.”

On telling his story:

“I felt in that moment that not only did my cousin violate me and take something from me, but now a person I trusted with this information also violated me and stole another choice from me.”

Danyol’s healing process began when his high school counselor encouraged him to attend student group therapy sessions, where he was able to open up about his story and receive support from his peers.

Other important aspects of Danyol’s healing process have been the support of his best friend of 15 years, connection to his faith, and artistic expression. Danyol created a one-man dramatic stage play about abuse and self-discovery. He wanted to tell his story in his own way and to reclaim the power of sharing what happened to him with his family and friends.

“It was very therapeutic. I remember days when I’d be working on the scripts and rehearsing lines—I would break out in tears. It was the first time I really came to terms with it. This happened to me. This is my truth, I am not a liar, I am not making it up.”

Danyol advocates for ways in which family and friends can be more supportive when a survivor discloses abuse. He recommends not pressuring survivors into giving detailed informations about their assault. This forces them into reliving the incident and can cause repeated trauma. This pressure to gain information makes the interaction focused on the individual who is asking, rather than on the survivor. Danyol instead suggests listening to the survivor, letting them share aspects of their story when they’re ready, and showing your support through believing their story. There are certain obstacles survivors who are men and boys face; learn more about them and find information and resources.

Danyol is currently pursuing a career in the entertainment industry and finishing his autobiography, which he hopes to complete next year. It has been important to Danyol to use his voice to empower other survivors to tell their stories when they’re ready.

“Talking about it really does take back power from the trauma.”

Hi, You can find me at http://lookingforthelight.blog and http://survivorsbloghere@wordpress.com. Stop by and pull up a chair. I look forward to meeting you. Melinda View all posts by Looking for the Light

One thought on “RAINN: Danyol’s Story”

I appreciate your comments, what you have to say is important to me. Thank you. Cancel reply