I was kindly gifted a copy of Manic Man, How to Live a Successfully with a Severe Mental Illness by Jason Wegner and Dr. Kerry Bernes from Soraya Nair, Managing Editor at Cherish Editions for a review. Thank you, Manic Man was another great read from Cherish Editions. 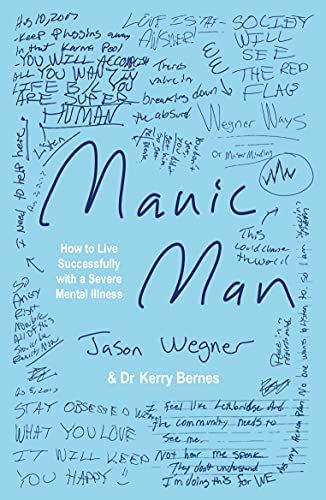 His courageous story begins with a glimpse of Jason’s normal life before the hypomanic stage of his illness kicks in. The mania starts when he tries the dangerous psychedelic drug LSD and takes off a few weeks later in Tanzania. He is in a full-blown manic episode while in Africa, and his behaviours and journaled thoughts demonstrate this. Weeks of mania continue after he returns from Africa until he is tricked into an ambulance and taken to the hospital’s emergency wing. He would be hospitalized in the acute psychiatry ward for 57 days, but his journey to improved mental health had just begun.

To lift Jason out of his severe depression, his psychologist Dr. Kerry Bernes developed “The Octagon of Life,” which represents the eight areas that Jason needed to focus on to rebuild his life. He shares this model in Manic Man, too.

“Jason gives an inside look into his brain during his mania, depression and recovery. It helped me to learn more about the bipolar disorder, as well as mental health in general. Thank you for sharing your story and breaking the stigma surrounding an invisible illness.”

“A must read for anyone who knows anyone going through a mental health crisis. Very well written. Thank you for writing this book.”

I completely understand where Jason is coming from because I was diagnosed with Bipolar Disorder 1 at 19 years old. Being in a Manic in a state is hard to describe. You have firm beliefs that are not reality, they are grandiose, supernatural, and intoxicating. So intoxicating you don’t want the feelings to stop even when you realize how sick you are.

Jason was like a train going full steam with no brakes, ideas and thoughts coming at him like the changing of slides in a hand projector. They say is the higher you are the harder you fall and Jason fell hard.

He spent 57 days in a Phsychaitrict hospital after his parents intervened on his behalf when his behavior became so erratic they grew concerned for his wellbeing.

During his stay in the hospital, Jason learned about this illness, began to come to terms with his behavior, and started medication which is essential for Bipolar Disorder patients.

I highly recommend this book to anyone who has a friend or loved one with Bipolar Disorder, it will give you first-hand insight and you can’t get anywhere else. If you think someone has Bipolar Disorder this is a good book to help you better understand the signs and symptoms.

We are experienced in creating and selling positive, responsible, important and inspirational books, which work to de-stigmatise the issues around mental health, as well as helping people who read them to maintain and improve their mental health and wellbeing. By choosing to publish through Cherish Editions, you will get the expertise of the dedicated Trigger Team at every step of the process.

We are proud of what we do, and passionate about the books that we publish. We want to do the very best for you and your book, holding your hand every step of the way.