National Airborne Day, August 16th, is a day of celebration for the accomplishments, bravery, and service of the Army parachute tradition. In 2001, President George W. Bush proclaimed this date to be the annual day to respect airborne activity in honor of the Airborne Rangers. Then following in 2009 the Senate made full recognition of the holiday through Resolution 235. National Airborne Day is on this specific date for this was the day of the first-ever United States military parachuting attempt.

Army parachuting was introduced as a tactic in combat following World War I. The first person in service to notice this style of combat was Brigadier General William Mitchell brought up the notion of trying this tactic. Then to quote Benjamin Franklin who stated, “Ten Thousand Men descending from the Clouds…”, agreed with Mitchell and advocated for this strategy for it brought a new look to combat.

The first parachute jump was completed by the United States Army on August 16th, 1940 to test and see how effective it could be in combat. The first unit of paratroopers was a collective group of 48 soldiers of the 29th Infantry Regiment who would do their training in Fort Benning, Georgia. The biggest question of this new tactic was will it be safe to drop in soldiers behind enemy lines. This new form of attack from the air was seen as dangerous but ultimately has become a critical and successful tactic in combat strategy.

National Airborne Day is a way to celebrate and appreciate ones who are brave enough to do these acts, but there are other ways of honoring the ones who make these heroic jumps. All soldiers in current duty and those who are veterans may receive medals and badges for their service in airborne activities. The medals and badges range from a lot of acts of duty, like training at Fort Benning, being certified to jump and participate in active duty as a paratrooper you receive an Army Parachute Badge for the service that is being done. 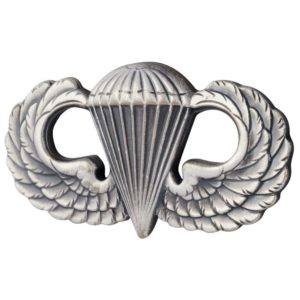