I want to send a special thanks to Marketing & Ecommerce Executive Laura Sebright at Tigger Publishing for sending me Life After Care From Lost Cause to MBE by Mark Edwards. 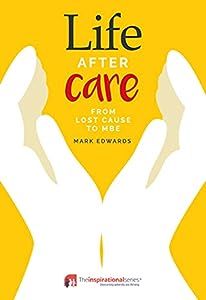 Mark Edwards spent the majority of his childhood in foster and then in a children’s home. Following this, he was sectioned under the Mental Health Care Act and admitted to a local mental institution.

Mark is now a Vicor in Newcastle upon Tyne and is a volunteer Ambulance First Responder. He’s a Police Chaplin to Northumbria Police and has previously as a lifeboat crew member. In 2010 he received an MBE for his service to the public. Mark is now happily married with four children and one grandchild.

Life After Care follows Mark’s journey with anxiety, panic attacks, and depression, and we learn about the enduring impact his childhood had on his mental health. His diary entries bring to life the thoughts and feelings of Mark, as a teenager, struggling to understand how he came to be placed in care, and how to deal with his adolescent feelings of loss and love.

On the verge of breakdown, Mark tried to take his own life and he was sectioned under the Mental Health Act. We follow his journey from local authority care to the wards of a crumbling Victorian psychiatric asylum, and beyond into life on the streets…This is a heartfelt, true story of how a troubled young man managed to turn his life around. From being imprisoned in the care system and mislabel

Wow! Heartbreaking and Inspiring. I have a traumatic background and can say that Mark’s life was far beyond traumatic it was pure hell on earth.

From an early age, Mark and his brother were shuffled from foster home to foster home never finding a family to take them in. After staying with one family for two years they were given hope that they had a forever home only to be taken away and sent to a children’s home. Mark spent his early adolescent years grappling with his panic attacks, depression, and anger. After years of neglect, his repressed emotions caused him to lash out and be deemed unmanageable. He spent the last few months before his 16th birthday living with his sister. Now turning 16, he ages out of the system and is left to sink or swim.

Mark is living with his sister and her husband on his 18th birthday. He has a job but spends his off time drinking and drowning in his traumatic memories. One day during a fight with his sister, Mark goes into a blinding rage and picks up a knife, pointing it at his sister.  He scares her but himself even more. Mark sinks to his darkest level yet and takes a razor blade to both of his wrists in an effort to end his pain. He second-guesses himself and goes for help.

His sister is forced to have Mark sent to a Psychiatric Hospital for his own safety.

Fast forward, Mark is a respected member of the community, a volunteer, and a man of God. He went from the darkest depths of mankind to chart away forward for himself. He was awarded an MBE by none other than Prince Charles himself.

This book is for anyone who is dealing with a family member with a traumatic background, or dark depression. Mark’s diaries speak volumes about the obstacles he has overcome and his mindset.

I highly recommend this book. It would also be great to give to a troubled teen, they may read it.

TriggerHub.org is the first mental health organization of its kind. We are bringing mental health recovery and balance to millions of people worldwide through the power of our books.

We have built a first-class resource of curated books produced and published in-house to create a unique collection of mental health recovery titles unrivaled in quality and selection. We work with experts, psychologists, doctors, and coaches to produce our books, but we also work with real people looking to share their stories to reach out to others and provide hope, understanding, and compassion. These brave authors also aim to raise awareness of mental health’s “human” face and its impact on everyday lives.